We hit a milestone last week. Not a good one: The U.S. passed China to became No. 1 worldwide in confirmed cases of coronavirus (see a current map). China has 18.5% of the world’s population; we have 4.3%.

Next comes the economic impact. In the week of March 2 – 6, initial unemployment claims were a respectable 282,000. Everyone said Goldman Sachs economists were smoking pot when they projected that initial claims would skyrocket to 2,000,000 the following week. Come on, guys, that’s a 600% increase. 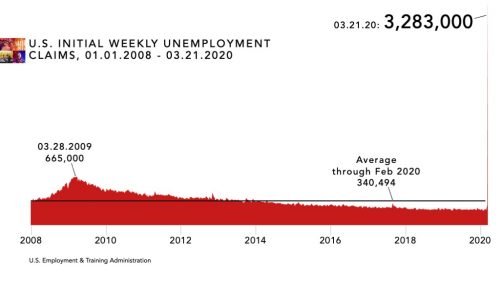 Shocking as it may be, it isn’t a bad thing. Nobody wants infected people coming to work because they can’t afford to lose a paycheck. That’s why a $2 trillion stimulus is so important.

Since the bill passed Friday, most of the buzz has been about the one-time payment of up to $1,200 per adult plus $500 per dependent child. Everyone who reported less than $90,000 AGI ($180,000 for couples) on their 2019 tax returns will get a check. Eventually, that is—the checks are coming from the IRS.

The Small Business Administration gets $377 billion to make zero-interest loans that can be used to pay employees, maintain health insurance coverage, or pay rent or mortgage interest. Those loans can be converted to grants if you use the money to keep people on your payroll.

LBM dealers need to have 500 employees or fewer to qualify for an SBA loan, but if you don’t meet that criterion you can still look forward to $280 billion in tax credits and deferrals.

No stimulus would be complete without a corporate bailout, and you don’t have to worry about this one, either. $504 billion is allocated for loans and grants to big business, cities, and states—including $17 billion to “companies deemed critical to national security,” which apparently means Boeing.

State and local governments get $150 billion, airlines get $58 billion to help keep employees on their payrolls, and hospitals get $100 billion plus a 20% increase in Medicare payments. The rest is pocket change: $216 billion for disaster aid, food stamps, colleges and schools, and transit systems.

If stimulus is the answer, this one should certainly do the trick. $2 trillion is 2-1/2 times the size of the stimulus package passed in 2009 to fight the Great Recession.

The big question now is whether stimulus will do the trick. Naturally, everyone has an opinion. Forbes is convinced that “we are facing a depression, not a recession.” Newsweek wonders, “Will the coming recession be as bad or worse than the Great Depression?” The Atlantic is sure that “this is not a recession. It’s an Ice Age.”

Actual economists seem to think differently. James Bullard, president of the St. Louis Federal Reserve Bank, believes the unemployment rate will hit 30% before this is all over. But, he adds, “once the short-term hit passes, the U.S. economy then could see a boom quarter where there’s a lot of production at that point thanks to pent-up demand.”

Former Federal Reserve chair Ben Bernanke—one of the planet’s leading experts on the Great Depression—says COVID-19 is not an economic catastrophe. It’s a natural disaster that happens to have a financial impact. “The coronavirus economic halt is more like a major snowstorm than an economic depression.”

But Bernanke is concerned that “if we don’t get the public health right, there’s no Fed monetary policy or White House and Capitol Hill fiscal package that’s going to work.”

So the first order of business is to “kick coronavirus ass,” as New York governor Andrew Cuomo put it the other day. Once everyone is back to work, there should be no mystery about what comes next. 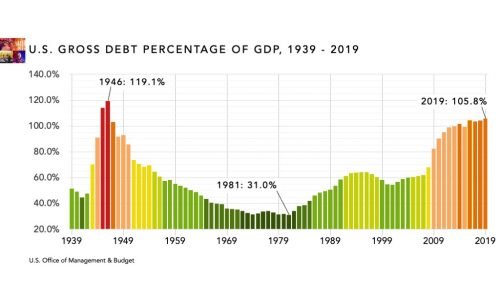 Between the stimulus, safety net spending increases that go with every downturn, and reduced tax revenue from the hit to everyone’s income, the federal deficit in 2020 is going to go through the roof. “At the rate the debt is about to grow,” says WSJ, “it could surpass levels reached after World War II as a percentage of gross domestic product.”

Once the pandemic finally peters out, the next order of business will be to figure out how to kick the national debt’s ass. That’s a show you won’t want to miss.

Half of Americans believe the social safety net is turning us into a nation of “takers rather than makers,” as Mitt Romney once described it. The other half believe the only “abhorrent” thing, to quote Bernie Sanders, is the fact that the net worth of the top 1% is greater than that of the entire middle class.

Both sides are convinced that the answer is a return to 1955: One believes we can solve the problem by taking the safety net away from slackers. The other thinks we should tax the rich like we did in the 50s and make them pay down the debt.

In reality, the effective tax rate on the wealthy—what they actually pay—is nearly the same now as it was then. In 2014 the top marginal income tax rate was 39.6%. On average, the top 1% of taxpayers paid 36.4%. The top tax bracket in 1955 was 91%, but the effective rate was just 42%. If the uber-rich today are a bunch of tax dodgers, they’re not very good at it.

As for slackers, nearly three out of four adults who receive food stamps have jobs. They’re either stuck in the gig economy (unstable jobs that start and stop a lot) or don’t earn enough to make ends meet (looking at you, Wal-Mart).

For now, we’ve all got one job: Stay the hell out of each other’s way to keep the rate of new infections low enough that the hospitals can handle it. Once coronavirus’s microscopic ass has been thoroughly kicked, we’ll be stir-crazy enough from sitting at home to be thoroughly primed for a knock-down-drag-out fight over the debt.

And relieved to be fighting about something that won’t kill you if you don’t get it right the first time.