February jobs reports are out and it was a surprisingly strong month in the U.S. Economists had projected a gain of 170,000 new jobs. Instead we added 273,000 jobs and the unemployment rate inched down from 3.6% to 3.5%.

Naturally people are excited about the unexpected boost in U.S. jobs. They’re also very worried about whether the coronavirus will spoil the party. 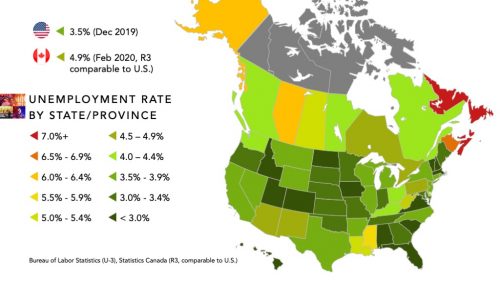 Maybe it won’t. But “experts are warning that (the U.S.) is unusually vulnerable to the spread of the disease,” says the Financial Times. The World Health Organization has been distributing coronavirus test kits since mid-January. The U.S. opted not to use WHO’s kits. We had the Centers for Disease Control develop its own test, but CDC’s initial test was faulty. It had to be reworked, then it took time to distribute.

By comparison, South Korea has tested more than 140,000 people. It found 6,593 who were infected, and so far 42 have died. That’s a 0.6% fatality rate, roughly the same as the death rate from garden-variety seasonal flus.

Whether all this justifies the level of concern is another question. Trade shows and conferences are dropping like flies. A cruise ship with 3,500 passengers sat off the coast of California for a week because 21 of them tested positive for the virus. The other day, Fox News’s Tucker Carlson reassured viewers that “at the very least, (the coronavirus) will reorder the global economy and change our politics.”

Counting only known cases, WHO says the global fatality rate is 3.4%. But literally every expert says that number overstates the danger (except Carlson, who thinks the virus is a Chinese bioweapon). It’s almost certain that thousands of people have already been infected. Most of them haven’t been tested or haven’t needed medical care, so they aren’t counted.

Adam Kucharski, a mathematician at the London School of Hygiene and Tropical Medicine who studies how infectious diseases spread, says the “data so far suggests that if you catch the coronavirus, you may be likelier to have no symptoms at all than to require hospitalization.” 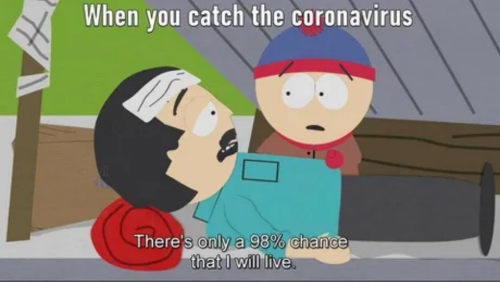 And apparently you can stop worrying about whether or not you’re going to catch it. The American Hospital Association estimates that 96 million Americans will ultimately be infected with the coronavirus, reports Business Insider. That’s 30% of the U.S. population, or ten times the number who normally catch seasonal flus.

AHA also estimates that 480,000 people will die from the coronavirus flu. That’s a 0.5% fatality rate, which is normal. If this is a bioweapon, the Chinese are going to have to do better than that.

There’s a lot scientists don’t know about coronavirus still, but unless something changes, the problem apparently isn’t that it’ll kill you (as long as you’re in reasonable health otherwise). It’s the fact that the virus is so contagious, it’s going to put a strain on the medical system trying to treat everyone who needs treatment.

That doesn’t sound like something that is likely to bring the economy to its knees. Eventually people are going to realize that there’s no point locking yourself in the basement if you’re going to catch it, anyway.

Once they do, chances are they’ll go ahead and take that vacation or go to that conference. Maybe they’ll even stop reading the news.